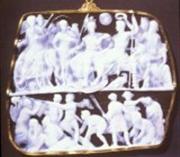 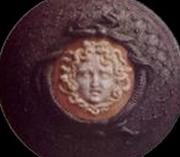 Even though the word "CAMEO" appeared on in the XII century, this type of jewelry was

greatly appreciated in the Hellenic ages. During this epoch time cameos were carved in

semi-precious stones, sardonyx shells and carnelian shells. They were much prized

suggestive contrast: white, yellow, brown, and reddish colors. For instance, to the right,

the famous "Tazza Farnese" is a cameo, the masterpiece of the Alexandrian art period.

because it found a fertile field in the Emperor's Court. Augustus brought to Rome, from

the East, Dioscurides, whose masterpiece, the "Gemma Augustea" (to the right) is in the

Museum of Vienna. From the V to the XIII century this art flourished again in the Italian

Renaissance. In Naples, at Ferdinand of Aragon's Court, lived the most famous cameo-

engraving was used for theroyal seal as his quality of master in cameo-carving. The cameo

in the XVI century,during which the Italian artists were called to serve the greatest European

monarchs: from Valerio Belli to Giovanni Beranrdi, to Alsessandro Cesati.

Throughout all the history, people of royalty have set the tone for jewelry fashion. It is said that also Queen Elizabeth loved to wear cameos. It is also noted that Catherine the Great had a very impressive collection of them, too.

Queen Elizabeth (1533-1603) pledged her affection to the Duke of Essex with her portrait carved on a turquoise and set in a ring. But Elizabeth had her French cameo artist cut her likeness or some scenic design for all her favorite cavaliers on semi-precious stones and turquoise, the choice cameo stone of the late medieval Europe. Ancient Egypt' s Cleopatra, however, had her lapidaries cut her a portrait in low relief on precious stones, such as emeralds for those she choose to honor. Victoria Regina (1819-1901), the famous Queen of the modern  world, collected cameos carved from shells and dispensed many to her admiring friends. The tastes of these three Queens mark the three materials much used in cameo carving during the long History of the Cameo. The semi-precious stones included turquoise, lapis. lazuli, jade, amber, chalcedony, sardonyx, agate and onyx. Of the precious stones, emeralds. amethysts, and garnets are the most used, with the ruby buy rarely, and no diamonds until about he 15th century. Shells include carnelian shell, sardonic shell, pink shell and tiger shell. Other lesser materials at the time included lava, mother-of-pearl, tortoise, lacquer, glass, clay, fruit stones, nut shells, ivory and bones.

Shells, lava, ivory and other softer materials have more fluid lines, gentler edges and a softness of finish not commonly found in turquoise and harder stones. The Greeks carved their cameos in somewhat low relief, leaving the back of the cameo flat, but late medieval carvers pushed up the height of the relief and hollowed out the underside for light effects. Cameo Carvers love to work on stones and shells with several layers of color, as the various hues help bring out the decorative details. In portraiture, for instance, the set of the eyes, the curve of the cheek, the turn of the ear against the elaboration of the hair, must be shown. Also the sheer and delicate folds of the garments falling from the throat over a swelling breast, the firm fullness of the shoulder, the grace of the hand holding, say, the symbolic flower or scepter--all can be brought out in carving, shading, highlights and density of color. Fine cameos take may colored layers.

Among the different Cameo materials, shells like sardonyx and carnelian and tiger shell  having from two to eight layers of color, give a perfect canvas for the Cameo Carvers to produce master pieces.

Cameo production is a very delicate operation. From the selection of raw materials to cutting and carving them into beautiful creations we pay great attention to perfectionism. Our craftsmen bring together a blend of the old traditional techniques with the new, creating magnificent works of art. Implementing the "new" techniques does not infer using any laser type machines to enhance or carve the cameos we sell.

As we have pointed out in ancient times, cameos have been prized by collectors and jewelers. Cameos are more than just jewelry. they are a personal item to be cherished and carefully conserved. Each cameo has it's own uniqueness and no two cameos hand carved can be exactly alike. It's as if you are wearing a painted masterpiece pinned or worn  around your neck to show everyone your admiration for the artists' work.  Our cameos are a conversation piece for everyone to admire from generations to generations to come.